The following is an excerpt of my book on planning your own trip to Ireland. It gives some myth and history of the Emerald Isle (as below), some tips and tricks to planning your own trip, and a huge section of hidden gems to find. Places off the beaten path, and away from the crowded tour buses.

Queen Maev is a wonderful character in Irish myth – a strong, willful woman who has power in her own right. While she makes many poor decisions, ruled by pride and rage, she is a far cry from the meek, submissive females in many other
mythologies.

Maev rules Connacht with her husband, Ailill mac Mata. It is possible she was once married to Conchobar. She is a very strong-willed queen, by all accounts fiery and demanding. She wanted to rule equally, and when Conchobar refuses, she leaves him and goes to Connacht, and is often understood to be a patron goddess of the land of Ireland. She frequently takes lovers to her bed. Some may be familiar with Shakespeare’s homage to her as Queen Mab in his immortal play, Romeo and Juliet. Like Cú Chulainn, there are many tales of this strong woman.

Táin Bó Cúailnge, or the Cattle Raid of Cooley

This is a tale full of boasting and pride, and the downfalls of such sins. King Ailill boasts to his wife, Queen Maev, that his white bull is the best bull in all of Ireland. Maev is therefore goaded into getting a better one – a brown bull which belongs to an Ulster chieftain, Dara mac Fachtna. Dara is unwilling to sell or rent the bull, so Maev decides she will have to steal it.
As her army approaches Ulster, the opposing warriors of the Red Branch suffer from a curse of weakness; all except Cú Chulainn (remember him?). He raids and uses guerilla tactics to slow the army before it arrives, and demoralizes it
greatly. Finally, he agrees to meet, champion against champion, with his former teacher, Fergus, who is in command of Queen Maev’s army.
The two heroes fight the duel day after day, matched equally in strength and prowess. Each night they sleep and dream.

After several days of duels, Cú Chulainn meets the war goddess, Morrigan, who is disguised as a young woman. He refuses her sexual advances (a big mistake!), and she harries and wounds him during his duels. His father, Lugh,
sickened by this inequality, agrees to take his place in the duels, and wins until his son is healed.
Maev’s raid is eventually a success. However, while the warriors of the Red Branch are still suffering from their curse, their sons pick up arms – and are slaughtered by Maev’s army. This throws Cú Chulainn into a berserker frenzy and he kills seventy warriors.
When Maev finally brings the Brown Bull to Connacht, it fights the White Bull, and they both die. The moral? Greed and pride are sins, punishable by loss and humiliation, and those who fight with honor and show kindness can win in the end.
The Ulster Cycle is full of heroism, treachery, love, and death. It seems to be too much drama to be contained within one lifetime, and perhaps it is simply a conglomeration of tales throughout Irish history, attached to known characters to make the tales more interesting. They do, however, nicely sum up the culture of the pre-Christian Irish – warlike, proud, headstrong, and passionate. It also emphasizes that the wealth of the people lie in their cattle and their battle prowess – and that these tales are passed back and forth like a mug of ale. 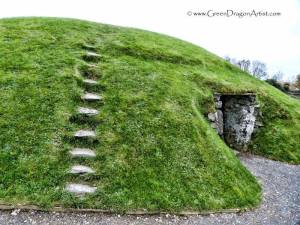 Also known as the Ossianic Cycle, this set of tales centers on the hero Fionn mac Cumhaill (Finn MacCool) and his warriors in a band called the Fianna. They are formed by Cormac mac Airt, then High King of Ireland, to protect the kingdom. They fight off invaders in the summer, and enjoy the hospitality of those they protect in the winter. Some of the tales deal with the excesses of this enjoyment, and the follies that derive from those excesses.
Finn is studying with a poet and accidently touches the roasting Salmon of Knowledge, despite the poet’s instructions not to touch it. When his finger is burned, he puts it in his mouth, thus tasting the salmon and receiving all its wisdom (in a similar tale, Merlin, or Myrddin, of Wales, does the same thing). He is then admitted into the court of the High King at Tara, and becomes the leader of the Clan Bascna. Using a magical harp which rendered all helpless, he kills a creature which terrorized the court every Samhain. As a result, he is made leader of the Fianna.
He marries a woman, Sadhbh (Sive), who had been under a spell in the guise of a fawn. She is human when in his house at the Dun of Allen, but she is tempted out one day, turns into a fawn and bounds away among the hills of Ireland. They never find her, but they do find a boy who had been raised by a fawn – Oisín. They believe this boy to be Sive’s son. Oisín becomes a legendary bard, and is the narrator of the tales of this cycle.

You can read this and more in my ebook on Ireland: Mythical, Magical, Mystical – a Guide to Hidden Ireland
http://www.tirgearrpublishing.com/authors/Nicholas_Christy/
http://www.facebook.com/greendragonauthor
https://greendragonartist.wordpress.com/