Our first night we slummed it – dinner at the Celtic Cross pub. We had a Parma ham and arugula pizza but was pretty good! And I had a Somersby Cider while Jason had Guinness. Cheers!
For breakfast, when we first arrived, we ate at a bistro called Stodio 29. They were one of the few places open, and had a grand selection of yummy. 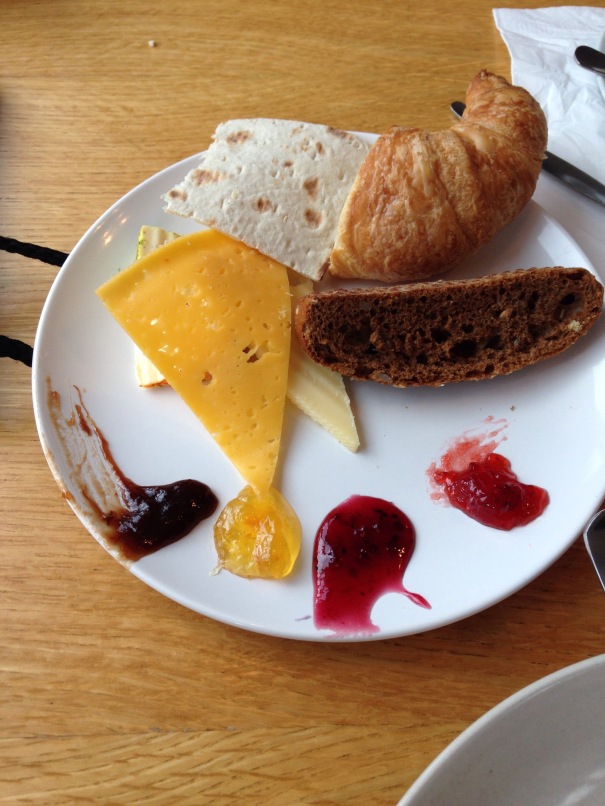 The succeeding breakfasts have been at the hostel, which have been pretty good. (Capital-Inn).

Dinner the second night -time to go native! Three Coats was the name in English. I can’t figure out Icelandic letters on my iPhone :). Dinner was an appetizer of puffin and seafood au gratin.

Both were delicious. The puffin was sweet and smoky.

Last night was at Scandinavian Restaurant. We considered several options, but this was a great choice. I had a Midnight Sun drink, which had vodka, Apple sec, Apple schnapps, and grenadine. J had a Lava beer. Appetizer was a reindeer pate. Dinner was a smoked salmon ion sandwich and a lamb dinner with pepper sauce. So much yum! No room for dessert.

2 comments on “Eating In Reykjavik”