Achill Island is the largest island off the coast of Ireland, and is in County Mayo, off the west coast. It is home to about 2,700 people, and attached to the mainland via a bridge, so you can drive there easily. 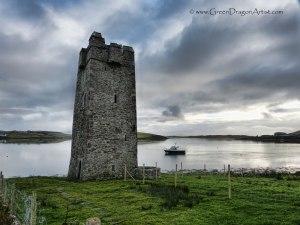 It has evidence of early settlement from around 3000-4000 BCE, so has been inhabited for a very long time – but it is still a very wild and rugged place, full of many heart-breakingly beautiful views. Megalithic tombs and small promontory forts give evidence of this long settlement. The island is a traditional home of the chieftains of Umhall, or O’Malleys, have been recorded since around 800 AD. It was later taken over by the Butlers and de Burgos. 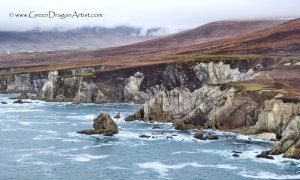 In the 17th and 18th centuries, many people migrated from Achill to Ulster and other parts, as there was much political and religious upheaval. 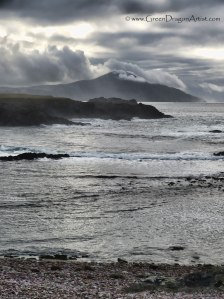 The island was once home to Grace O’Malley, sometimes known as the Pirate Queen, who was born on nearby Clare Island. She was part of a powerful seafaring family, and inherited her father’s fleet. She is thought to have met with Queen Elizabeth I, another powerful woman of the time.

In Dugort, a historical site called the Achill Mission was built in the 1830s by Reverend Edward Nangle. The mission had schools, an orphanage, an infirmary and a guesthouse. It was closed in the 1880s. 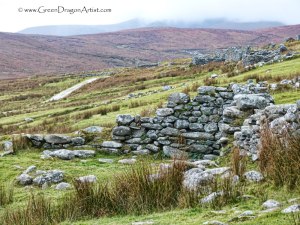 There is a small village near Dugort that lies in ruins, at the base of Slievemore Mountain. About 80 ruined stone cottages lie crumbling at the foot of the mountain, strung along like beads on the landscape. This village was deserted in 1845, during the Great Hunger (An Gorta Mór), a time when the potato blight made the potato crop rot in the ground. There was enough food for all in the country, but the English landlords continued to export the other crops, leaving the natives starving. It is often mislabeled as the Great Famine. Many of the families of Dugort moved to Dooagh, as it was closer to the sea, and they could supplement their meager food with fish and shellfish. 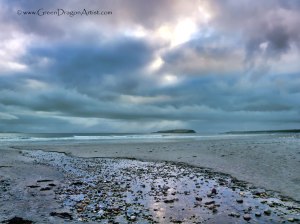 I’ve got an historical fantasy novel coming out in October called Legacy of Hunger, and Achill Island is one of the settings within the story, which is set in 1846. 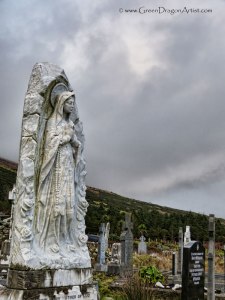 Achill is home to several beaches of striking natural beauty, including Keel Beach, which is a popular tourist location. 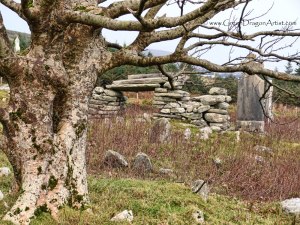 Other beautiful sites include Keem Bay, Moytoge Head, and the Atlantic Drive, which runs along the south and west of the island. 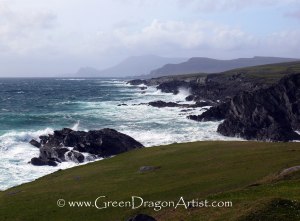 West of the Deserted Village lies an old Martello Tower, built by the British to warn of Napoleonic invasions. There is also a 5000 year old Neolithic tomb in the area. 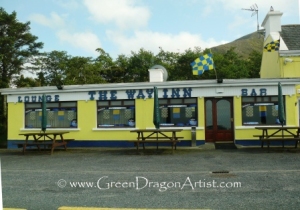 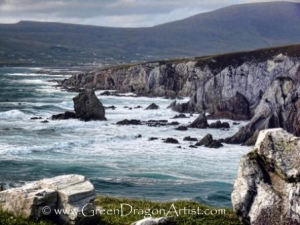