The historical truth behind Ragnar Lothbrok

Posted on November 30, 2015 by Green Dragon Artist — Leave a comment

An excellent article on History vs. TV from TheDockyards.com 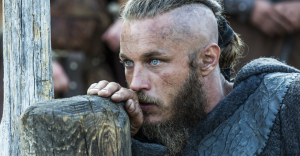 While it is without doubt that Ragnar Lothrok is a Norse legendary hero, being mentioned in various sagas and several poems in Old Norse, the character played by Travis Fimmel in History Channel’s television series Vikings wasn’t quite portrayed with utmost historical accuracy. This evidently stems from the fact that a TV series which is partially based on historical facts such as Vikings needs to have a much more artistic dimension than a historically accurate one so as to be better received by the public. This is also why the TV series received many critics because of its lack of historical accuracy and thus several historians inevitably criticised the characters’ clothing, the depiction of the Viking society or the presumed ignorance of the Norsemen regarding the existence of the British archipelago.

To read the rest of the article, please follow the link: http://thedockyards.com/the-historical-truth-behind-ragnar-lothbrok/