Thanks for another lovely review for Legacy of Truth! 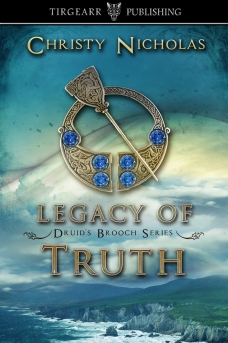 Legacy of Truth by Christy Nicholas

Published by Tirgearr Publishing on July 6, 2016

Gifted with a magical brooch, passed down in her family for generations, Esme finds herself isolated and ill in an unfamiliar land.

Her sister plots to steal the family heirloom from her in order to exploit the magical powers for her own gain, and Esme must battle for survival of herself and those she loves.

Éamonn Doherty eased onto the old rocking chair beside the crackling fire. As soon as he settled, he was bombarded with children, clamoring eagerly for a story from Grandfa.

Well, it was his fault. Whenever he returned from his wanderings around the country, he would give them a story, a tale of…